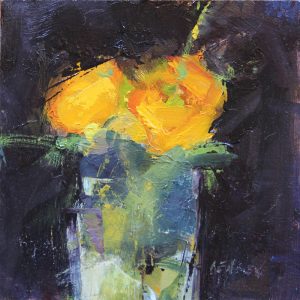 Red Raven Art Company is honored to represent the many fine visiting artists who continue to support and show in our gallery. We offer a sampling of works by each artist and continue to update new works. Please contact the gallery to inquire on any artist or additional works.

Scott currently teaches art in Lancaster, PA. He received a M.A.Ed at Millersville University, PA and a MFA from the Vermont College of Fine Art. Scott's work often deals with nostalgia, ideology, and interpretations of vintage images.

Kim, a Lancaster County native, seems to have been born with the love of art in her soul. She earned her BFA in Communication Design from Kutztown University and has owned TCG Design in East Petersburg for more than 27 years.

Sherri Trial has been exhibiting for 30 years. She has garnered many awards in national and international juried exhibits, combining lettering and the abstract. “I interpret text to create a visual mood, where sometimes the legibility of the words becomes secondary”. She lives and works in Penn ...

Fresh Paint Fridays, New Works from Our at Home Artists

Justin is from Lancaster and graduated from the PA Academy of Fine Arts. He works in both oil and metal point.

Kristin Blanck lives in Lancaster, PA. After graduating from West Chester University with a degree in Anthropology/Archaeology and a minor in Art History, she received a Masters in Fashion Design at Drexel University. Working in oils, she finds herself drawn to still life compositions.

Born in Hutchinson, KS, Jenny now lives in Lancaster, PA. She holds a BFA from the University of Kansas and is earning her MS from Eastern University. Her images created through wood burning and brought to life with paint are based on her travels and daily observations.

Jan was born in Texas, raised in Arkansas and now resides in Phoenixville, PA. Jan has a business degree from the University of Arkansas, but later in life decided to pursue her love of art. Her work is painterly, lush, and expressionistic.

Lee lives and works in Lancaster, PA. She received her BFA from The Rhode Island School of Design. She enjoys exploring mixed media by incorporating both image and words within her work, and likes to paint her travels and experiences.

Carol resides in Kennett Square, PA. She received her BFA in painting from the University of Delaware in 1985. Carol is known for her expressionistic landscapes and her works are represented in many public and private collections.

LYNN DAVISON resides in Naples, FL. Davison, a graduate of the Ringling School of Art and Design, is a figurative painter who hopes to provoke introspection through her work. Intending to reveal a universal truth of what it means to be human – sometimes disconnected and vulnerable.

Gail grew up in Bucks County Pennsylvania where she now resides. While there she studied graphic design at Bucks County Community College. “As self-taught mosaic artist, Gail began in the traditional Pique Assiette style by using broken china in a playful, unstructured way. She continues to expe ...

Katherine Horst, a graduate of Pennsylvania College of Art & Design, lives in Manheim, PA. Her occupation as a collage artist finds her incorporating various materials such as layered paper and paint to convey a sense of beauty.

Lynnette is a Pennsylvania artist specializing in contemporary mixed media animal paintings and illustrations. Her mythological-themed artworks have been displayed nationally as well as regionally. She is originally from Delaware and currently lives in Ambler, PA.

Rachel is from the West Chester, PA area. She creates watercolors in tiny formats. Each piece is literally no bigger than a quarter!

Temre Stanchfield studied classical figure painting at University of Puget Sound in Washington State, Studio Art Center International in Florence Italy, and University of Arizona, earning her MFA in 2001. Her paintings depict the natural process of renewal, embodied in the ever-changing landscape.

Robert received an MFA in printmaking from Syracuse University. He is an internationally renowned printmaker, draftsman, and painter. An avid fisherman, his graphic works often reflect his time spent outdoors along the Susquehanna River and surrounding rural landscapes.

Stuart Dunkel currently lives in Boston. He received classical training at The Boston Museum School and Academy of Realistic Art in Seattle. Stuart defines himself as a contemporary realist. His work evokes joy, optimism, humor, and playfulness.

Jackie graduated from Kutztown University with a degree in Art Education and taught advanced art at Donegal High School in Mount Joy. The art of drawing and mark making influences all of her varied subject matter.

Jeff Schaller graduated at Beaver College. His pop art paintings tie together his love of silk screen, encaustic, and acrylic. His work has been on the hit TV show 'Friends'. He has done murals for all 21 Iron Hill Breweries. His work is in collections both here and abroad.

Catherine lives in a Delaware River town. Her paintings evolved from a decade of making clay sculpture. She focuses on the potency of color; provide surprise and awkwardness in an environment of equilibrium; and engross the viewer who notices their subtle nuances.

Beth Bathe is a Plein Air painter. Most viewers ask, Is it watercolor, is it oil? Beth’s answer: “somewhat both.” She works with Water Mixable Oil Colors in a limited toned palette. She is from Lancaster PA and teaches classes and workshops at her studio, Short Dog Studio, in Ephrata, PA.

Susan is a painter whose art celebrates the colors and depths of Life. With each exploration more hues and tales are added to her palette.Her paintings, often heavily layered, are responses to strata of time and stories she discovers on her journeys. Come along.

As a boy Dennis doodled, sketched and drew on school tablets while his teachers lectured. He went on and spent 25 years as a management consultant, traveling 50 weeks a year throughout the country. Upon retiring from consulting he settled in Hershey and reengaged in art.

Dave Krantz has a B.S. in Art Education from Kutztown University. His childhood memories of life on a Lancaster County farm and how light plays against buildings and objects often enters into his work.

Alicia Irwin was born in Lancaster, Pennsylvania. She studied the principals of art and design while attending Millersville University. There is real delicacy in her conscious planning and execution, while maintaining the utmost care to retain the objects visual and historical integrity.

Capturing the atmosphere from the immensity and grandeur of the plains to the human mark etched upon it, Steve's plaintive and expressive palette of light and movement draw both from his past and from the present day of all that surrounds him. His medium is oil on canvas. Steve received an MFA fro ...

Allison attended the Pennsylvania Academy of Fine Arts. She also studied sports science at the University of Delaware. Her paintings are not just about the subject matter, but are melancholic self-portraits that hopefully create an emotional or visceral experience.

Terry graduated from Indiana University with a BFA in Textile Design, and now lives in Berkshire County, western MA. Her paintings are filled with the printed patterns and lively colors of textiles, and celebrate home, family and community.

Devon is a painter and printmaker from Berks County, PA, working primarily from observed landscapes. She Received her BFA from Kutztown University with a concentration in painting and currently is the Assistant in Printmaking at Bucknell University.

Adam currently teaches Art at Garden Spot High School where he is also head wrestling coach. He received his M.A.Ed from Millersville University. Wildlife, Landscapes and nature inspire his exploration of color, texture and composition.

Emily earned her Bachelor of Fine Arts Degree from the School of Visual Arts in New York. Emily documents the ordinary, the everyday, the nostalgic, the abandoned and the identity of the American landscape. Inspiration comes from urban and industrial scenery, vintage signage and typography.

Elizabeth's paintings are an expression of life filtered through the spirit of one human being. Her feelings about the excitement of living are visually translated via interactions with friends and family, moments in nature, and ideas from books or current events.

James earned his BFA in painting at Kutztown University, PA. He now resides in Reading, Pennsylvania. His work reflects inspiration from his local environment and community; finding beauty in what is often overlooked.

Teresa works out of her studio storefront in vibrant Downtown Phoenixville, PA. She works in oils on top of newspaper covered board. She sketches her subject directly with paint and works in thin layers allowing areas of the newspaper to show through, creating noise and adding depth to each piece.

Jean received her BS in Art Ed from Kutztown University and lives in Fredericksburg, PA. Her subject matter varies and her goal is to create varied works that are honest and reflect her intimate personal glimpses of what she loves about the world through direct painting application.

When not teaching at the Pennsylvania College of Art and Design, Fowler works as the Collections Manager for the Society of Illustrators Museum in New York City, curating, conserving and installing great works by the world’s best artists.

Jennifer received her MFA from the Pennsylvania Academy of the Fine Arts. She is a Printmaker and Mixed Media Artist from Southeastern PA. Her work explores themes of identity, memory and the fragility of the human body.

Jill is from Lebanon County, PA and currently lives in Hershey. She received her BA from Albright College. Jill is a plein air painter and a colorist with a distinctive style that sets her apart.

Originally from Chicago, Ken received a BFA from the University of Illinois Urbana-Champaign. He calls his style, "sophisticated chaos," where an accurate drawing gives way to an expressive painting with drips, marks, and splatters as part of the finished piece.

Angella creates expressive artwork and simple, clean design content as a freelancer. When she’s not creating, she’s learning about the power of the mind, energy and healing.

Aubrey is from Lancaster and currently attending the Pennsylvania Academy of the Fine Arts in Philadelphia. He is the recipient of the CX Carlson Summer Residency program.

Kristen received a BFA in Printmaking from Syracuse University, and an MFA from Clemson University. Her mixed media works combine painting and printmaking, and encaustic. Kristen is currently a Professor of Art and Department Chair at Albright College.

Matt Savitsky was born in Lancaster, PA,1982. He is a multidisciplinary performance artist who lives in Los Angeles. He received his MFA from UC San Diego and his BFA from Cooper Union. He is currently a professor of film & video at the University of San Diego and of Photographic Practices at Cal St ...

Kelly thinks of herself as a nomadic painter; one who wanders until the moment is right to paint. She embraces the unexpected, and realizes that inspiration could strike at any given moment. Kelly graduated from the Pennsylvania Academy of the Fine Arts.

Linda received her BFA in Studio Art from Millersville University. Oils and watercolors are her preferred medium but the possibilities and effects of mixed media entice her to explore many avenues. Nature is a common theme in her works.

Rhoda Kahler resides in West Chester, PA and received her BFA from Wester Chester University in 1995. Her clay tile work is inspired by nature. Each piece embodies the emotion felt by a relationship to the source of inspiration.

Eric Diehl is a natvie of Lancaster, PA. He currently lives and works in Brooklyn, NY. and received his BFA in painting at the Pratt Institute. His oil paintings are inspired by the human body and its frailty within a vast world of violent industry and expansive nature.

Fred Rodger and Mark Dennis with, "A Collaboration of the Gods"

Fred and Mark collaborate on a show focused on the mythology of gods and goddesses. Fred created the paintings in acrylic and then Mark did all the woodworking and sculpture that frames each painting.