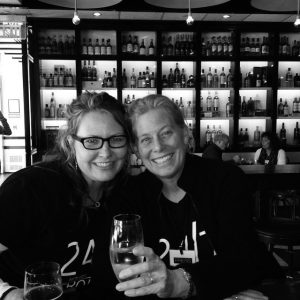 The Lancaster 24/7 Project is a collaboration between artists Darcie Goldberg and Rhoda Kahler. On May 3-4, 2019 the two artists spent a sleepless 24 hours in Lancaster city. Red Raven made sure they had behind the scenes tours of the History Museum, Demuth Museum, The Fulton Theatre, The LNP Newspapers, and many others, so that they really got to know some of the history of our wonderful city. This body of work, chronicles the 24-hour adventures with Darcie photographing the sites, neighborhoods, and people of Lancaster, while Rhoda created ceramic impressions from the architectural details and objects she came across. They have captured Lancaster as never seen before. The project resulted in artwork that has a tremendous range, going from near abstraction to explicit realism. The merging of their worlds become both documents and artifacts of their adventures in Lancaster. It truly is a show about the people, the history, and the buildings of Lancaster. It truly is everything Lancaster.

The 24/7 Project started in 2014 and has covered some major cities including Philadelphia, Baltimore, Atlantic City, Washington, D.C., Providence, Boston and New York City and now has added Lancaster to this impressive list. The 24/7 Project reminds the viewer that every city has its stories and its soul.

Darcie Goldberg is a professional photographer with over 40 years’ experience. Goldberg has traveled extensively which has fueled her strong, award-winning black and white photographs, which have been featured in solo exhibitions, as well as in public and private collections. Goldberg studied photography at the Art Institute of Pittsburgh before going to work for United Press International. After several years of freelance work and teaching black and white film and darkroom technique courses, she completed her Masters in the Creative Arts at Hahnemann University, Philadelphia. She continues to pursue her fine art photography, using her specialty –black and white, handmade, silver gelatin prints—to striking document her travels to familiar and exotic locations. She was a founding partner of The 24/7 Project with ceramic artist Rhoda Kahler. Inspired by recent trips to Cuba, Goldberg plans to pursue documentary and street
photography expanding her repertoire by working now with digital images and reproductions, as well as with medium format film and photographs.

Rhoda Kahler is a ceramic artist with a studio in West Chester, Pennsylvania. Her work has been featured internationally, nationally and regionally in magazines, newspapers and television, including on the Home and Garden Television network (HGTV) and Crave Magazine, among many others. In addition to exhibiting in galleries, Kahler’s large scale handmade tile murals and sculptures appear in public and private collections. Notable commissions include the Delaware Art Museum, West Chester University and the Philadelphia Environmental Film Festival. Kahler conducts workshops nationally and participates in a wide range of Artist Residencies, some of which include the Philadelphia Museum of Art and Inglis House. Kahler is an adjunct faculty member of West Chester University, where she received her Bachelor of Fine Art degree in 1995. Drawing from nature, much of Kahler’s art bends toward the organic, making use of abstraction and assemblage. There is a tactile intimacy that is translated through the mud between her fingers to her pieces that beg to be touched. Kahler is captivated by surface and in a never-ending exploration of vast textures that can be achieved through clay. The majority of Kahler’s work is cone 6 oxidation however, pit firing techniques and photo lithography were used for the 24/7 project.