The Carlson Cultural Trust is dedicated to furthering C.X. Carlson’s vision of supporting the arts in the community. One of the chief ways that the Trust accomplishes this is to discover and support young emerging artists and any emerging endeavors that hold promise of artistic enrichment of our community.

In 2008 the Red Raven Art Company will be establishing new programs that will further engage young, emerging artists with the ideals of the Cultural Trust. We are establishing live artists in schools program which will make our artists available to school programs in the area in hopes that our expertise will help young students become aware of the art world and its possibilities. The Red Raven Art Company will be establishing a connection with the Carlson Summer Arts Program to provide the students with an experience of visiting various art galleries in the city of Lancaster. Our artists will also be available to demonstrate or talk to their classes. These are just two programs that allow us to connect to and help develop young emerging artists.

The Life of C. X. Carlson

The Life of C.X. Carlson C. X. Carlson, born in Minnesota in 1902, left school in the seventh grade at 12 years of age to become a baker’s apprentice. He later worked in iron mines, lumber camps, and as a seaman for three years. Soon his talent for art drew him the Crane Technical College in Chicago and to the Chicago Art Institute, where he spent four years. Later he attended the National Academy of Design in New York for three years and the Art Students League in New York. He traveled to Antwerp and Munich and also studied under master artists. While in New York he met and studied with Gorkey, Lee Krasner, Jackson Pollock, and Mark Rothko. He taught art classes in figure study at the Art Student League. Locally he also taught classes at the York Art Association, the Jewish Community Center, and the Iris Club. He started the Octorara Art Association. His experience as an illustrator, cartoonist, mural painter, and teacher in New York City captured the attention of other artists and designers. He painted murals in the New Zealand building of the New York’s World’s Fair. He created Elsie, the Borden Company’s cow. He also did work for Ford and General Motors. His impact continued in the political arena during World War II. He was a staff artist and cartoonist for “On War Times,” a publication of the Pentagon and the Bureau of Public Relations. He spent two years painting, lecturing, and exhibiting in twenty-one American Republics and South American countries for the U.S. State Department for the Good Neighbor Policy. While in South America he completed more than 750 paintings as well as research for a book, which was never published. He is the author of a series of twenty art illustration books that sold millions of copies. He was commission to illustrate “Old Lancaster” and completed over 150 paintings of historical Lancaster buildings. Critics believe this series to be his finest works. During his lifetime he exhibited widely throughout the Americas. His paintings hang in well-known collections including the Metropolitan Museum of Art In New York. He is listed in Who’s Who in Art and Who’s Who in the East.

C.X. moved to Lancaster County in 1947 and in lived in Kirk’s Mill near Quarryville. There he became a historical painter. He completed in his lifetime more than 15,000 paintings and uncountable drawings for friends, relatives, neighbors, and members of the art world.

We sincerely thank the C.X. Carlson Cultural Trust for the help it has given us to allow us to follow this dream. Through its financial help we can assist emerging artists on their way to a professional career. 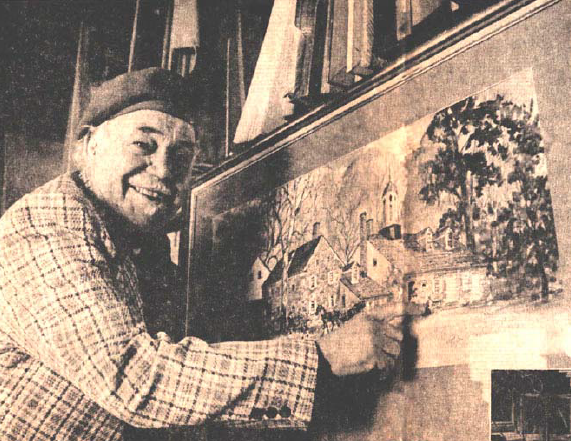